The Great… err… The Attempted CISPA Blackout of Apr 22 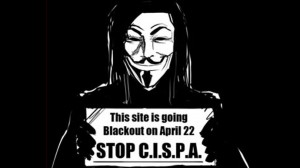 You might remember from a little more then a year ago, January 18, 2012, the internet joined forces and protested the SOPA bill by blacking out websites and shutting down services to the public. The protest was one of the first of it’s kind, and had a significant impact and was felt around the world, getting support from some of the biggest websites there are such as Wikipedia and Google. Arguably, the protest was successful, with the SOPA bill being rejected a new bill with more protection for the users built to take it’s place.

On Apr 22 2013, the protest was attempted again in order to over-turn the passing of the CISPA. The 2nd demonstration, while certainly receiving support, did not quite go as planned.

What is the CISPA?

The Cyber Intelligence Sharing and Protection Act (CISPA) is a proposed law in the United States which would allow for the sharing of Internet traffic information between the U.S. government and technology and manufacturing companies. The stated aim of the bill is to help the U.S government investigate cyber threats and ensure the security of networks against cyberattacks

So essentially, our ISP’s will be able / mandated to share our usage information with the US government for purposes of cyber security. Big Brother is watching. While the bill targets cyber security, there are of course little additions that widen the spectrum of what they are allowed to use the information for which creates grey areas and uncertainty to the public of what is being watched and what isn’t.

Of course, the targeted issues are valid and noble causes (terrorism, child abuse, etc), but at what cost do we allow these issues to be monitored? The bill is the electronic equivalent of letting someone read our mail before it’s sent, or rummaging through your house while you’re at work.

Who Secures this Data?

Another big concern with this type of information sharing is the protection of our privacy from illegal attacks. Of course, hacking into homeland security systems sounds like a pretty daunting undertaking, and I certainly imagine it to be… but how is this information to be handled and transported by the internet entities to the government?

To me, it seems like this is going to be a big huge swinging door for hackers to take advantage of. Securing information behind a network is one thing, but as soon as information needs to be transported from one place to another, particularly when this transport is to involve hundreds if not thousands of companies, security holes are going to occur.

It’s no surprise that internet freedom & privacy activists are strongly and vocally opposed to the bill. On Apr 22 2013, there was a blacking out of websites after Anonymous made a call for action from their Twitter feed.

The blackout received support… but came no where near to the support that was received for the stopping of the SOPA bill. I would imagine that most people who are not frequenting activist / hacker / underground sites did not notice the impact of the blackout at all.

According to AnonyOps there was just under 1000 websites involved in the protest, compared to the 7000+ involved in the SOPA protest. There is a list of sites posted and very few recognizable names amongst the list.

Any support they got however is good. it’s unfortunate the protest was not more successful as the cause is quite a good and important one. However… Maybe the “failure” of the protest is a win in itself. The protest has been covered by a ton of news sites over the past 2 days which continue to bring attention to the subject. In fact, the failure of the protest has basically gone viral itself.

Derek Eatough is a professional computer programmer and web developer from Winnipeg, Canada, and is the author of this site.
View all posts by Derek Eatough →
← Building a Free Web Server at Home
Best Free Dynamic DNS Services →